The big news in the birding world is that the Buff-breasted Paradise Kingfisher have returned from New Guinea for their breeding season. A spectacular bird - almost gaudy, with a bright red/orange bill, bright red feet, blue back and head, and orange breast. The long white tail, which is often seen first, flicks up and down as the bird sits and calls from perches in the mid-level of rainforest. 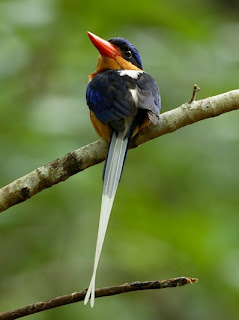 These birds arrive every year in late October/early November to nest in the small termite mounds on the forest floor. They are at least two weeks early this year and have arrived 'en masse' - some of which will continue further south as far as Mackay, while others will stay to settle in find a mate. The conditions are perfect this year with the termite mounds being moist and easy to excavate.
We look forward to a productive season for these very special birds.
Posted by Trish and Andrew at 8:25 PM

Daintree is famous for it's rainforest but, for birdwatching, a range of habitat is important. Part of that mix here in the tropical lowlands are the paddocks and pastures of local farmland.
The cattle that graze the pastures are followed by large numbers of Cattle Egrets, waiting expectantly for insects to be disturbed in the grass. Farm dams and waterways are homes to ducks, lapwings and plovers as well as egrets and kingfishers.
Various grasses in the fields, when the seeds mature, provide feed for a range of seed-eaters, including the Chestnut-breasted Mannikin, that can be seen in large flocks feeding on the grasses. 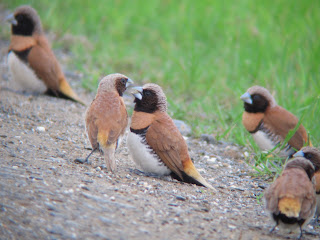 Golden-headed Cisticola are often seen, during their breeding season, singing madly from the top of grasses or on the wires of fences. They enjoy wet, swampy areas and degraded paddocks and slopes. 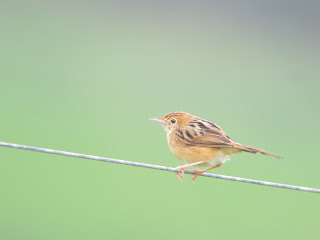 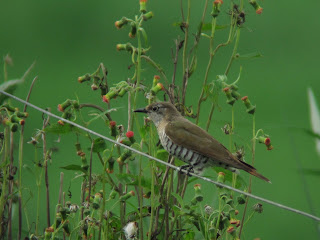 Don't underestimate a drive along one of the beautiful valleys of the Daintree River and it's creeks, if birdwatching in the area. You will almost always see Rainbow Bee-eater, Forest Kingfisher, Australian Pipit, Masked Lapwing, Cattle Egret and many more interesting species.
Posted by Trish and Andrew at 10:42 PM