An excellent week for birds in the Daintree, with the weather markedly improved. No rain to speak of and the hum of lawnmowers dominates as everyone tries to catch up with the ever-growing grass. Temperatures are still up to 30 degrees by day, despite it being mid-April.

The numbers of the summer migrants have reduced greatly - Pied Imperial Pigeons, Metallic Starlings and Black Bittern are all more difficult to see, and there seems to be just one or two young Buff-breasted Paradise Kingfishers remaining. The adults have all gone back to New Guinea where they will stay until the migration south begins again in October for breeding.
Some birds that have become easier to see though, over the past week or so include the Topknot Pigeon, Wompoo Fruit-Dove and Spotted Catbird. The Wompoo Fruit-Dove has the remarkable ability to disguise itself despite it's bright purples, greens and golds. 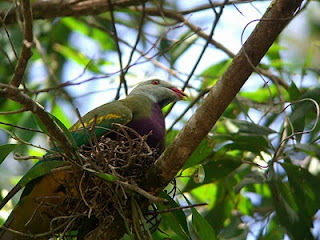 Another common, and colourful, bird at this time of the year is the Rainbow Bee-Eater, Australia's only bee-eater. They often sit on fences, fly out hawking for insects, and returning to the same spot to eat them. A pleasure to watch! 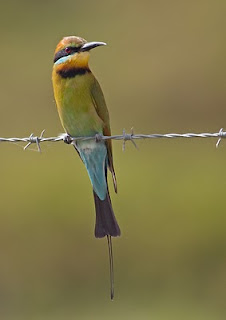 A very, very wet Easter  and beyond with over 1 metre of rain falling in the past 12 days.
Birdwatching has been difficult due to the conditions, and it's difficult conditions for the birds as well with food supplies being harder to get.
Some good raptors have been seen lately with juvenile White-bellied Sea- Eagle in Daintree Village and Brahminy Kite, Black Kite, Whistling Kite and Nankeen Kestrel all seen in the valley. 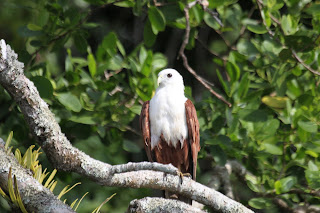 A common bird seen beside the road is the Pheasant Coucal, a member of the Cuckoo family. The poor things fly really clumsily, particularly when wet, and can be seen crash-landing in trees and in cane fields. The breeding plumage is particularly beautiful. 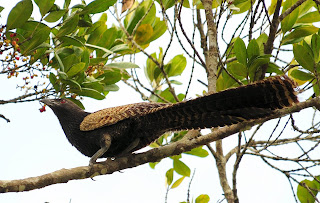 Posted by Trish and Andrew at 8:08 PM