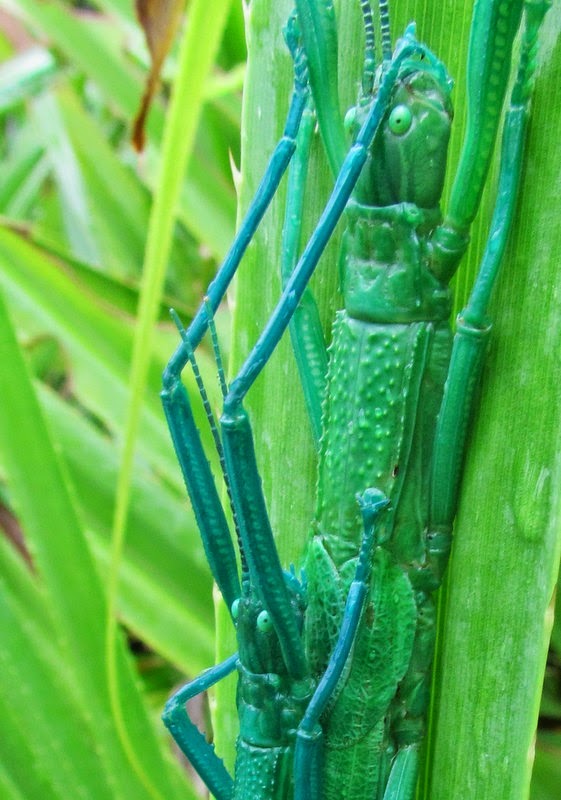 What’s  a quirky blueish-green colour and spits out peppermint spray?

It’s not a seasick sailor, but a very unusual insect, called the peppermint stick insect (or megacrania batesii).

There’s no other  insect –or insect colour for that matter-- quite like it. We only get them in the Wet Tropics World Heritage rainforest, mainly in the northern end, around the Cow Bay to Cape Tribulation areas.

They don’t really spit, rather they squirt from their backs. When disturbed by a predator, they send out a surprising sweet-smelling spray of milky-white gooey peppermint. Just enough to sting the eyes of a preying spider or bird, or surprise a curious tourist.

Their diet is the serrated leaf of only the pandanus plant (aka scrub breadfruit), in which they also hide skilfully.   While indigestible food to us, it's the bread of life for peppermint stick insects.
Even when they are inextricably entwined, like the coupling two in the accompanying photo, they are almost perfectly camouflaged among the pandanus leaves. The male is the much smaller of the two, but with better wings, does most of the flitting around. She is bigger, and can fly but doesn’t much need to. She just drops the fertilised eggs down the leaf, where they hatch a few months later.

When I think insects, I think of the Daintree Entological Museum (the Insect Museum) near Cooper Creek. Apart from its collection under glass, you usually see spiny leaf insects, Goliath Stick Insects and, if you’re lucky, a caterpillar of the Giant Hercules Moth. It’s off Turpentine Road, twenty minutes drive south of Cape Tribulation, or 70 minutes north of Port Douglas.

Where to find the little fellas

Where else can you find the Peppermint Stick Insect?
Their Pandanus food lives mainly in swampy areas and near the beach, so that’s where you’ll most likely find them. Try alongside Thornton Beach, Kulki (around the Cape Tribulation Carpark and toilet area), Dubuji Boardwalk and in Myall Beach area around  the Cape Trib Campground. They are all good spots. Look for the telltale signs that the pandanus leaves have been freshly eaten.

Only peppermint Stick Insects would eat pandanus leaves—have you ever tried them? Don’t. They’re too prickly for a start.